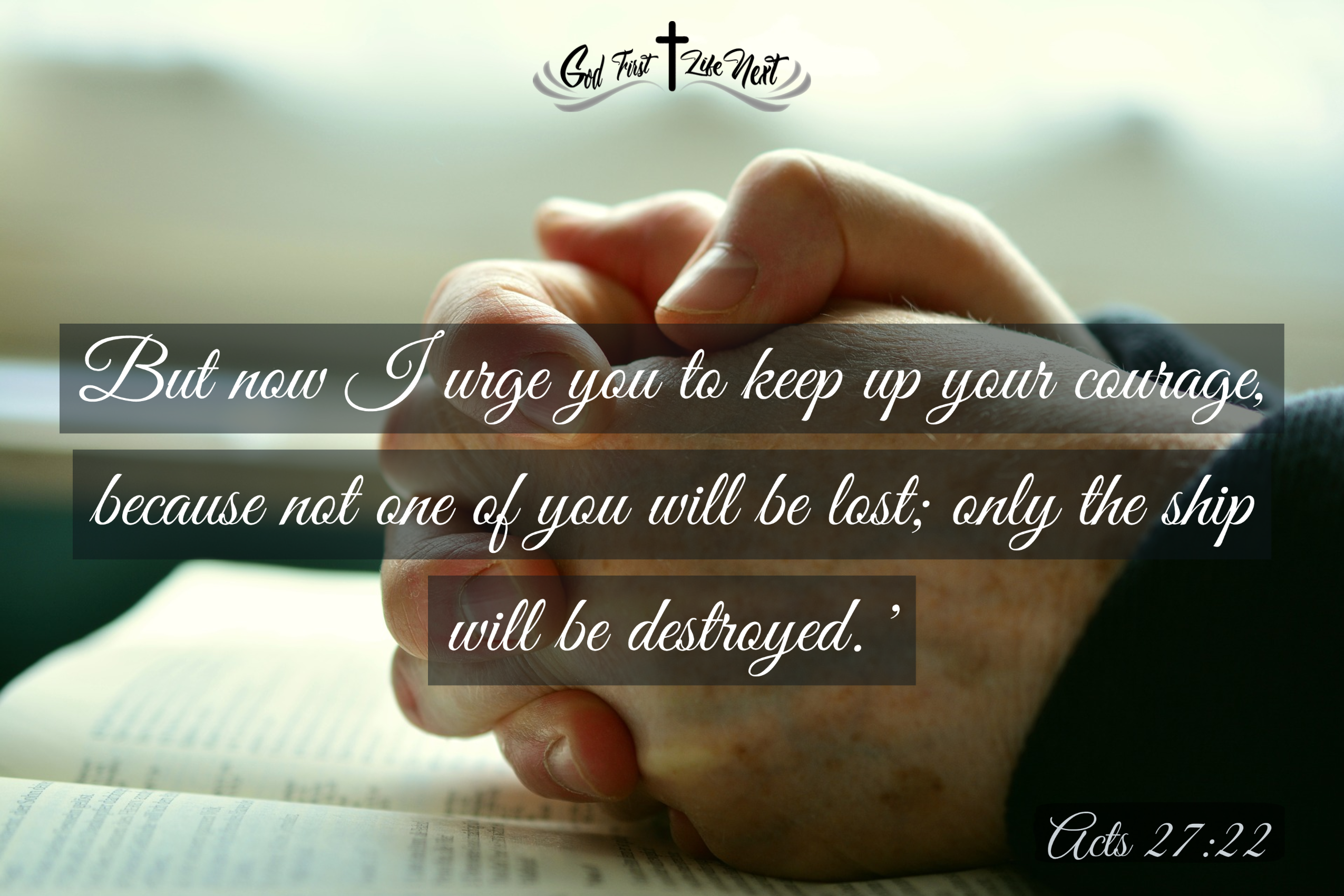 But now I urge you to keep up your courage, because not one of you will be lost; only the ship will be destroyed. ‘

How do you react when God speaks to you?

Do you sit there patiently and listen for the whole answer?

Or do you keep moving forward in the direction you originally wanted to move?

I have done both and honestly I will probably do both again. The real problem with not listening to the whole answer is that we tend to get busy and stop listening before all of the instructions are given.

In the book of Acts Chapter 27 Paul warned the crew of the ship not to continue on, even after they had had massive difficulty getting to where they were.

“Men, I can see that our voyage is going to be disastrous and bring great loss to ship and cargo, and to our own lives also.”  Acts 27:10

God spoke to these people through Paul.  He told them if they chose to continue on the journey it was going to be disastrous.

If we continued to read through Chapter 27 we would find that it was indeed disastrous.

God still spared everyone’s life that was on that boat.

Sound familiar? Yeah like every day of my life.

God shows me that I need to change direction by making things more difficult than they should be, but I still don’t listen.  Then he prompts me to listen with someone’s advice.

Then after I continue to choose to go my own direction, he shows me just how hard it can be.

After I “wreck” he saves me.

You are probably asking, How does all this relate to never giving up?

We are getting there, I promise.

About 14 days into a HUGE storm, the boat was starting to break apart. They literally tied ropes around the hull to help it stay together.

Then Paul came to them again and encouraged them.  “I urge you to keep up your courage, because not one of you will be lost; only the ship will be destroyed.” Acts 27:22

He didn’t stop there though.  He took some bread and gave thanks to God in front of them all. Then he broke it and began to eat. Acts 27: 35.

Why is this so important?

Because he didn’t take credit for anything that was about to happen.

Paul gave full credit to God when he shared his belief with them through prayer.

The exact same way we should do it.

We should always have the courage to pray.

The bible doesn’t tell him Paul’s prayer, but I am sure that he gave thanks for everyone and everything that had happened.  And prayed for the continued safety of the whole crew.

Today we want to encourage everyone to never give up.  When things seem tough, keep moving forward. Of course listen to God, but keep moving in the direction he needs you to.

We also want to encourage everyone to be the person God designed you to be.

I think you get the point.

Things to think about:

When was the last time you were encouraged by someone?

When was the last time you encouraged someone else?

What can you do today to encourage someone around you to have faith and trust that it is all going to work out exactly the way it should.

Lord, God almighty, today we come to you simply to say thank you. Thank you for always being there for us. Thank you for always helping to guide us on our adventures. Yes they are all adventures. God, thank you for giving us the encouragement we need in order to succeed. Thank you for allowing us to give others the encouragement they need.  Lord, we do pray that you would help us to slow down and listen to you. Help us to hear what you have to say and actually listen to you.  Help us not stop listening in the middle, but listen to the whole story, then take action. I know that it’s tough, but please help us. God please be with YOUR earth and the people in it. Help to show us how to take care of it as you intended us to.  Help us to give 10x more than we receive.  Help us to know that you will always take care of us no matter how rough the waters are. God thank you for everything.

We ask all this in your precious son’s name.