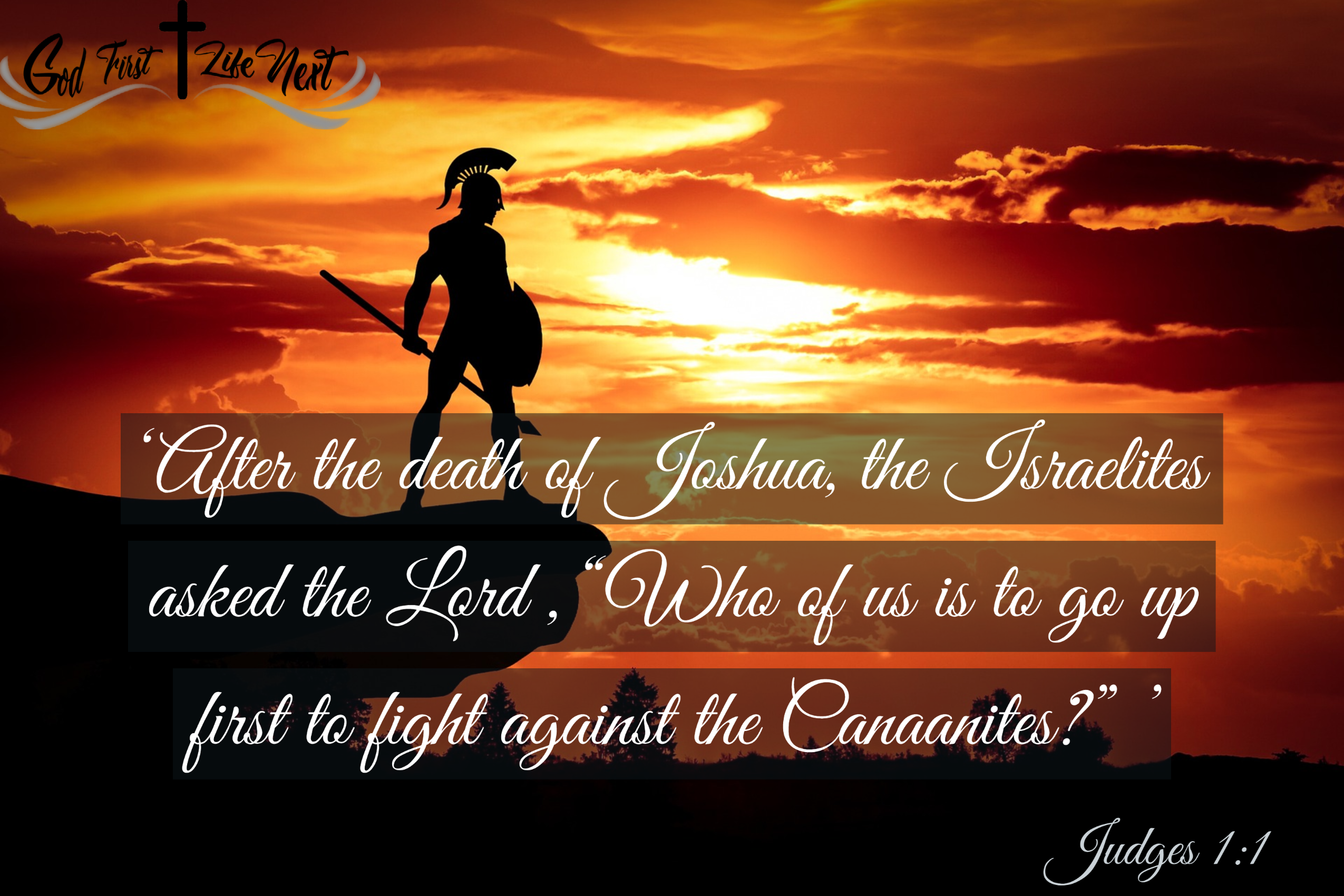 ‘After the death of Joshua, the Israelites asked the Lord , “Who of us is to go up first to fight against the Canaanites?” ‘

I came to God and asked, “God, you have put it in my heart to cover another book of your great words in our devotionals, show me which chapter it should be.”

If you haven’t guessed yet it was the book of Judges.

Have you ever asked God for him to show you the next leader?  Maybe it was the leader of the country, the company you work for, your church, a group, or anything?

I know that I have, many times, for many different situations.

Here the Israelites were asking God to give them a leader to help them fight the Canaanites.

The crazy thing is that after Joshua passed away at 110 years old, they started living among the Canaanites.

They stopped following God and started praying to other gods. The gods that the Canaanites were following.

Instead of living the life God wanted them to live, they started listening to the world.

‘After that whole generation had been gathered to their ancestors, another generation grew up who knew neither the Lord nor what he had done for Israel.’ Judges 2:10

One of my biggest fears is that our country, right now is following these same footsteps.

When we signed the Declaration of Independence most of our country believed that God was the reason for our freedom.  They knew in their heart that there was only one God, and he is an amazing God.

Just as the Israelites did thousands of years ago, we are following in their footsteps.

What happened to the Israelites when they stopped following God?

He said, ‘I will use them (the Canaanites) to test Israel and see whether they will keep the way of the Lord and walk in it as their ancestors did.” ‘ Judges 2:22

God tested the Israelites to see how they would react to what was going on around them.

He placed them is trying situations,

Have you been “placed” into difficult situations with friends, family, or work?

Maybe God is seeing how we will react to the situation, so he knows how well we are listening to his words.

I know that God does this with me.

He will give me something extremely difficult to accomplish, or an extremely hard to deal with client, or a new HUGE challenge that I would have never expected.

Then after that is finished, and he sees how awesome I did, or (more often than not) how badly I failed, he gives me other situations that help build my character to do it better.

If I don’t learn fast enough, he will use someone in the world to “slap my hand” so that I feel the pain and learn the lesson that he has spent so long trying to teach me.

My question for everyone today is, now that we are aware of how everyone is trying their best to “discredit” God, how will you react?

Will you teach your kids, grand kids, the neighbor kids, strangers on the street about God and his glory.

Will you go on with life, not giving God credit for everything?

It is 100% your choice how you react and what you do. (ps. God gave us that choice too)

Today we want to encourage everyone to take a step and show the world your stance on God!  Share something through any media platform, Facebook, Instagram, LinkedIn, Email, Twitter, Snapchat, Tik Tok, it doesn’t matter.

Get out there and be the 1% who aren’t afraid to share their belief with the world.

Lord, today we come to you with open hearts and open minds.  We come to you today with the hope that you will fill our hearts, minds, and bodies with your spirit.  We pray that you give us the strength to not be like the world, but instead be the person you designed us to be.  Lord help us not to drift through life, but to live out the purpose you have for us.  Help us to know that your purpose for us can change, it can be tough, it can be easy. We know that you designed us for a reason and made us who we are because you needed us for your service.  God today, like every day we know that you are amazing.  We know that you use the past to help us learn.  We know that you are placed in difficult situations so that we can learn, so that we can grow and be even better Christians than we were yesterday.  God thank you for the blessing that you have granted us.  Thank you for everything that you have ever given us, especially your words. The bible is filled with amazing lessons & truths, we just have to have an open mind and heart as we read your GREAT word. God, thank you.  Lord, we want to finish this prayer by asking you to help us continue in your service.  Help us to grow closer to you every day, in every task that we do.  God thank you for everything!