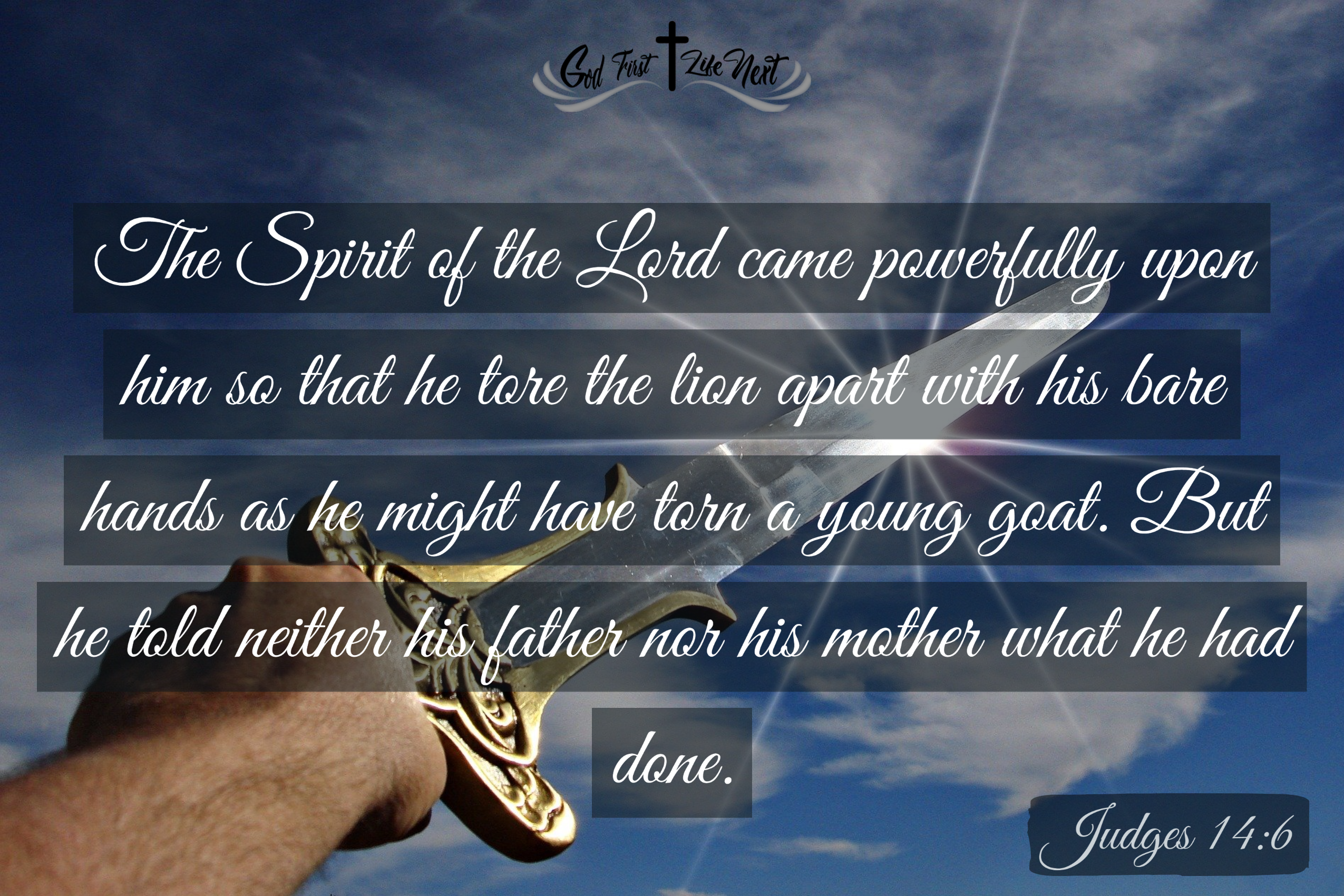 The Spirit of the Lord came powerfully upon him so that he tore the lion apart with his bare hands as he might have torn a young goat. But he told neither his father nor his mother what he had done.

Throughout the truth of Sampson the spirit of the lord came on him many times.

Once when a Lion attacked him on his way to the Philistine country.  With his bare hand he tore the lion apart.

Once after his first wife betrayed him and told her people the secret to his riddle. He struck down 30 men.

Also the ropes he was tied with became like charred flax and he struck down 1000 men with the jawbone of a donkey.

Again when he caught 100 foxes and tied them together by the tail then tied a torch to them and set off through the fields.

The spirit of the Lord does not come to everyone in the same way.

Sometimes it is strength. Like when a mother lifts a car off of her child. Or a firefighter heaves a heavy object out of the way to save a life.

For me I know that the spirit of the Lord is with me when I get goosebumps talking in front of a group.  I can’t explain it except for I KNOW that God is there and that my words are touching someone in a special way.

For authors it might be when they write a book or special paper.

Mechanics might get the feeling as they tighten bolts just before starting the engine that they just rebuilt from scratch.

For a mother it might be when her kids pray a special prayer or when she sees them doing something so kind that it melts her heart.

I think you get the point.

God does NOT come to everyone with strength like he did Samson.

Can you think of the last time the spirit of the Lord came on you?

How did it feel? Where were you at? What were you doing?

Sampson had strength and courage.

It took courage to go to a village that HATED the Israelites to find a wife.

It took courage to kill the lion.

It took courage to give himself up to the Philistines.

It took courage (and a little stupidity) to tell his wife about his weakness.

It took courage to pray to God to give him one last bout of strength after his eyes were gouged out.

God gives us all Strength and Courage of our own.  We might not be able to tear a lion apart, or take down a 1000 men with just the jawbone of a donkey.

But we have our own strengths.

I have been blessed with many.

God blessed me with the strength to share my faith with the world, to take MASSIVE action, to be able to teach others, as my dad calls it “the gift of gab” or the ability to talk to anyone anywhere about anything.

Today we really want to encourage everyone to use the strength that God has given you.

Look deep into your heart and soul and think about when you felt the spirit of God come on you.  Now harness that feeling and go out into the world and make a difference with your God given strengths.

Lord, God, you are an amazing God!  We know that you give us so much more than we deserve.  You have blessed us all with these amazing gifts and powers. You might even call them SUPER POWERS! We pray today that you help us use our superpowers for you. Help us to harness them in a way that others might see you through our actions.  God just like you gave Sampson massive strength and courage. We pray that you would give us the strength to use the gifts you’ve blessed us with.  Not only the strength to use them but the courage to not be afraid of them.  God sometimes I am scared to use the strengths that you blessed me with. But when I start showing them to the world, you always show me that is exactly why you blessed me with them in the first place. Today God we pray for your help and your guiding hand to be on everyone in the world.  We pray for your healing powers to be spread throughout all the land and waters. And yes God we pray that your spirit come on all of us and help us to use the God given superpowers you blessed us with!