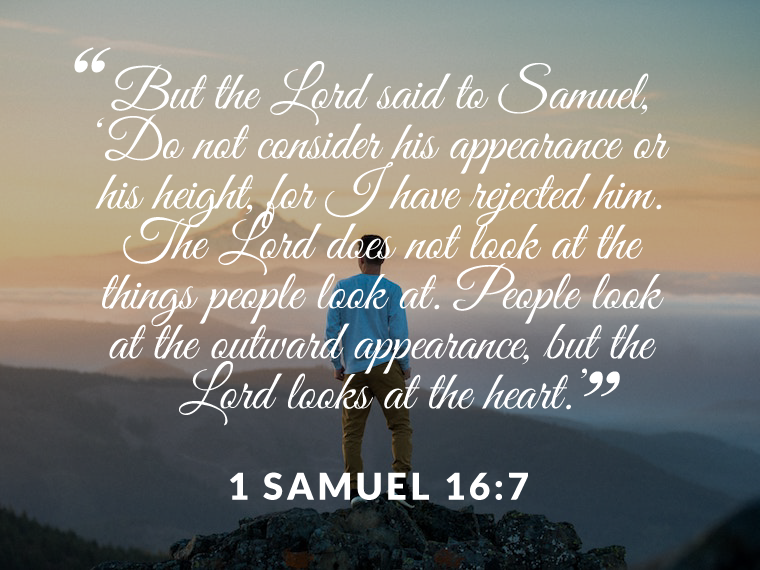 God was speaking about one of David’s older brothers in this verse. Samuel thought that this fine young man must be the one God has selected to be the new king after Saul. Samuel made that assumption based on his person thoughts. I can only imagine that he was thinking our new king needs to be Strong, Courageous, Brave, Handsome, Tall, Muscular, and Smart (In no particular order). What Samuel didn’t realize was that David was all of those things he just wasn’t developed yet.
How often do you feel like you don’t have the skills necessary to do something, or for that matter anything? Personally, I feel that way a lot. When I was younger I remember being afraid to do something because I might mess it up. If I tear it apart, I might not be able to put it back together then what? As I got older, I realized that as long as I paid attention to the little details there wasn’t anything that I couldn’t do, simply because I knew that God was there. I knew that God would give the necessary skills and knowledge to complete the project. Much like he did with David.
David had the courage to go up against a man who was close to 9’9” tall with no armor truly no weapons just some small stones and a sling. David also knew that God was with him, he could feel it. He knew that he was standing up for what was right, he was defending God. David’s oldest brother the one mentioned in the scripture didn’t have the same courage. To be honest I don’t think I would have had the courage either. The point is that God new what David would develop into. He knows everything about everybody; he doesn’t judge us by our cover. He looks closely at us to discover our true potential.

God, today we come to with open hearts and open minds. We ask so much yet we give you so little, still you continually bless us. Lord, we ask that you would help us to see not only our true potential, but also the potential in others. Help us to look past their outward appearance and look deep into their hearts and our hearts. Do not allow our eyes to be the hindrance that causes us to stumble. We pray that you help us to believe in yourselves. Even your son had troubles moments before being takin into custody. He asked that if it be your will to remove the trouble before him. God he trusted you, and so do we. We know that you know what is best for us. We ask that you give us the faith of Daniel in the lion’s den, hope of Moses in wilderness, and the heart of David always putting you first. Lord thank you for your insight and wisdom, than you for your help in our everyday situations. Thank you.