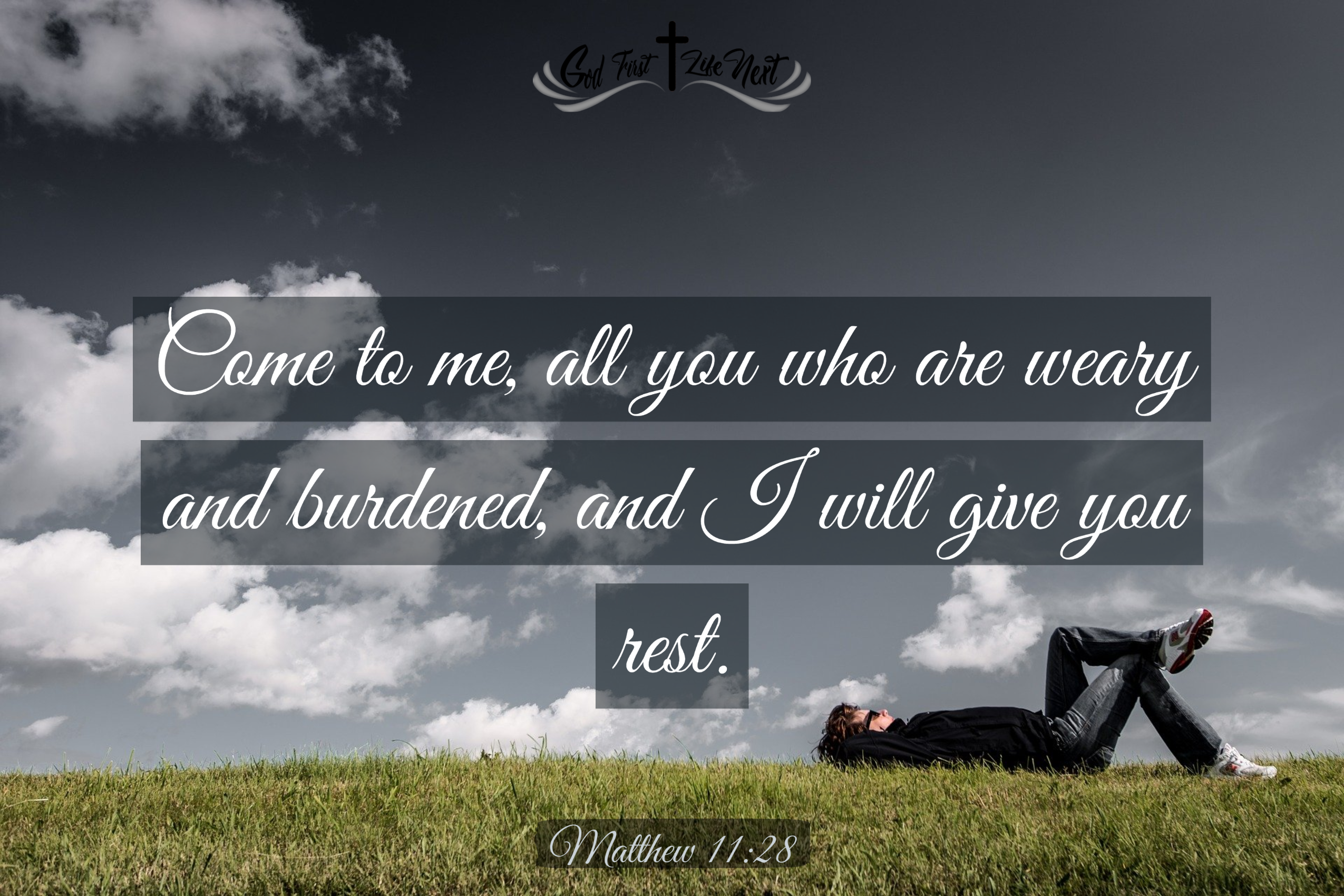 Come to me, all you who are weary and burdened, and I will give you rest.

What is addiction and who does it affect when someone is addicted to something?

Let’s start with webster’s definition of addiction: a compulsive, chronic, physiological or psychological need for a habit-forming substance, behavior, or activity having harmful physical, psychological, or social effects and typically causing well-defined symptoms (such as anxiety, irritability, tremors, or nausea) upon withdrawal or abstinence: the state of being addicted

Have you ever thought about being addicted to something GREAT?

Like being addicted to prayer, or addicted to being nice to others, or the addiction to smiling?

The truth is that I never thought about the possibility of addiction being a good thing.  It has always carried a bad stigma in my mind.  (until I started writing this devotional, amazing how God works isn’t it?)

For right now let’s focus on the addiction in the “bad” way.

When we are addicted to drugs, who does it affect?

Of course, it affects the user of the drugs. But it also affects their family and friends, the person who they bought the drugs from, and anyone they come in contact with, even when they might be sober.

You might be asking if they are sober, for the moment, why would it make a difference.

The thing is that when we are addicted to something it literally changes our whole personality. Even when we are off it for a while.

Let’s take prayer as an example.

If we are addicted to prayer and we pray all day every day. What happens when we stop praying?

Our mood changes, usually for the worse.  We might be temperamental or over react to things people say to us.

Alcohol works the same way but in the opposite direction. When someone who has been a functioning alcoholic they walk around in a daze and half out of it all the time.  They never feel good at all. Their body is trying to get them to learn that they need to stop drinking.

Because their mind is in a different state, they don’t usually pick up on the hints their body is sending them.

Instead of drinking less, they drink more because they don’t feel good, and the alcohol makes them forget their problems. For a few moments.

How does it affect those who are close to the addicts?

Again let’s say that someone is addicted to drugs, their family and friends care about them and are probably wondering whether to call the authorities on them.  They don’t want to see them suffer and go to jail, but on the other hand that is the one place where they HAVE to get sober.

I have seen an addiction ruin marriages, tear fathers and mothers away from their families, and break up friendships that have been around since the two of them were “wee little lasses’.

What can we do as Christians for those who are addicted to things that cause pain to themselves and others?

We can be there for encouragement.  Show them that no matter what happens we love them and we are here to support them.

It might be tough, but we can help the person who calls for help.

We can pray for them, continually.  We can talk to them with God in our hearts.

In first Corinthians chapter 10 verse 13, it says No temptation has overtaken you except what is common to mankind. And God is faithful; he will not let you be tempted beyond what you can bear. But when you are tempted, he will also provide a way out so that you can endure it.

We should also know that the road to recovery is not an easy road and we should be considerate and understanding of it.  We should know that there will be HARD days.

I once worked with a recovered meth addict, he had been clean for over 10 years.  One day when we drove through a subdivision with our windows down, I looked over to the passenger’s seat and his face was white.  I asked him, “what’s up bud, everything ok?”

He replied, “roll up the windows, NOW!”

I kinda thought he was joking, it was a beautiful day, but the look on his face told me otherwise.  So we rolled up the windows of the pickup, cranked the AC, and put it on recycle mode so it wouldn’t bring in any outside air.

A few minutes later I asked him, “what happened back there?”

His response shocked me, “there was a meth lab back there, I could smell it.  All I wanted to do was go find it and get my fix.”

This guy was clean, I mean super clean!  Like he didn’t drink, smoke, chew, cuss, anything.  He was truly reformed.

But one smell from a neighborhood made him want to relapse after 10 years of sobriety.

As outsiders to STRONG addiction, we need to be aware and not put the recovered in any situations that might cause them to relapse.

God never wants us to cause any harm to those around us.

Today I want you to evaluate your life and see where your temptations are.  Are you addicted to anything? Maybe Facebook, TiKTok, or some other from of social media, the News, maybe something harder like drugs or alcohol, or even cursing.

Do you know of anyone else that might have a problem that you can help them with? God will give you the right words to say to them if you feel compelled to talk to them.

Lastly, pray! Pray for anyone you might know who has an addiction, (to anything except for God). Pray for a fast recovery.

Lord, God, today we come to you with heavy hearts.  They are heavy because we know that we all have been addicted to something at one point in our lives.  We know that you are the reason we recovered from that addiction, or are the reason we are starting to recover from it.  God, we also know that all things are possible through you.  You make sure that we have what we need and the right words.  Today we pray for all of those who are still addicted and all of those who are attempting to recover from an addiction. God, you are amazing and you help us every day.  For that we are thankful.  God, we pray that you help us to stay strong.  Help us to have the “right” words when talking to others.  We pray that you show us how to help those who are struggling.  We pray that you give us your light and allow us to spread that light to others who need it.  Lord, we pray that you open our eyes and our ears to our own flaws and help us to fix those flaws before we ever even think about helping others with their imperfections. Thank you, God, for listening to us and comforting us.

Did you know that I have suffered from addiction in the past?

It’s not easy to talk about but hey if we tell the world it can make it easier to handle. It seems harder to talk about here because everyone here is family.

Before I really came to God I was cursing like a sailor.

I mean every other word was a curse word.

It was F this and F that and #&!@ all over the places. I was addicted to cursing.

That’s not the only addiction I had though. There were others.

The point is that no matter how great other people think we are, we all have issues.

Let me tell you how I cleaned myself up from all of the addictions that I have ever suffered from.

1. Make up your mind that you do not do that anymore.

You have to tell yourself that you no longer are that person.  You actually have to die to the old person you were and be reborn as your new self.

Someone without an addiction.

2. Get rid of all the temptations.

For example, if you want to stop drinking, you have to get rid of all the alcohol in your life.  You can’t go to the bar anymore because it will be too convenient to get just one drink.  You might even need to avoid that aisle or section in the grocery store.

This is hard.  Because once you get rid of the temptations Satan comes in and shows you other ways of getting what you want.

3. Tell the world that you are changing.

This one was probably the hardest for me because it admitted to the world that I HAVE A PROBLEM.

And I hate that type of attention.

Here’s what happens when we tell the world, not just a friend that is quitting our habit.

It holds us accountable to ourselves.

Who wants to tell someone that sees you and says hey how is the fight going, “OK I guess, actually I gave in and am doing it again.”

NO ONE wants to tell anyone that.

This might be the last thing I tell you to do, but it needs to be the most important.

When we give everything that we have, think, or want to God. he takes is there as our support system.

What an amazing support system

I have been about to slip back into a horrible habit and my phone will ring, or a text will come through from a friend or family and it causes me to think for a split second. Then I have to make a convincing choice whether to slip back or step up.

That’s God working in our lives.

The truth is that we all suffer, we all have issues, we all can get depressed and want to just go curl up in bed and binge watch TV all day.

We have to make the choice to change ourselves.

If you are suffering from any type of addiction and want someone to talk to, we are here.

Please reach out to us, we can help. At the very minimum, we can pray for and with you.

Stay strong, and be the person God designed you to be.