Do we give what we want to receive? 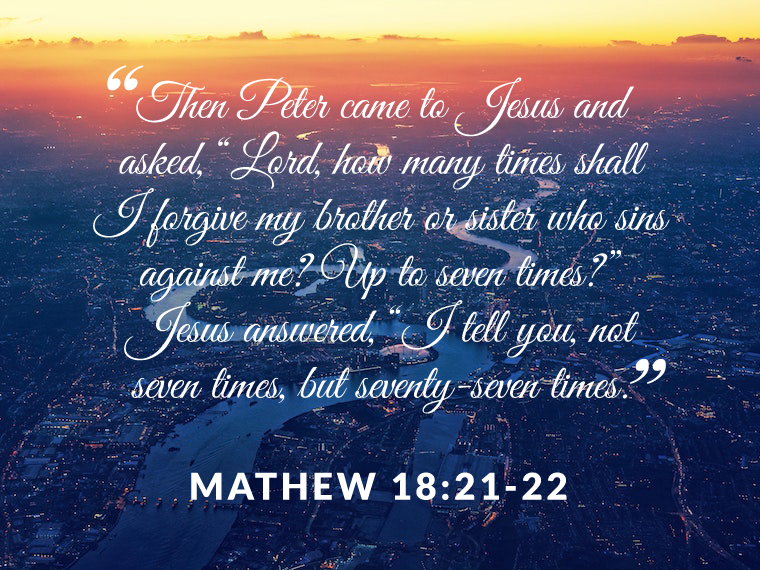 “Then Peter came to Jesus and asked, “Lord, how many times shall I forgive my brother or sister who sins against me? Up to seven times?” Jesus answered, “I tell you, not seven times, but seventy-seven times.”

23 “Therefore, the kingdom of heaven is like a king who wanted to settle accounts with his servants. 24 As he began the settlement, a man who owed him ten thousand bags of gold[b] was brought to him. 25 Since he was not able to pay, the master ordered that he and his wife and his children and all that he had be sold to repay the debt.

26 “At this the servant fell on his knees before him. ‘Be patient with me,’ he begged, ‘and I will pay back everything.’ 27 The servant’s master took pity on him, canceled the debt and let him go.

28 “But when that servant went out, he found one of his fellow servants who owed him a hundred silver coins.[c] He grabbed him and began to choke him. ‘Pay back what you owe me!’ he demanded.

29 “His fellow servant fell to his knees and begged him, ‘Be patient with me, and I will pay it back.’

30 “But he refused. Instead, he went off and had the man thrown into prison until he could pay the debt. 31 When the other servants saw what had happened, they were outraged and went and told their master everything that had happened.

32 “Then the master called the servant in. ‘You wicked servant,’ he said, ‘I canceled all that debt of yours because you begged me to. 33 Shouldn’t you have had mercy on your fellow servant just as I had on you?’ 34 In anger his master handed him over to the jailers to be tortured, until he should pay back all he owed.
35 “This is how my heavenly Father will treat each of you unless you forgive your brother or sister from your heart.”
Mathew 18:21-35

Do we give what we receive? We all have moments when we may be more critical or judgmental then we need to be, but how would that make you feel if it was returned on you? I don’t know about you, but I try my hardest to do my best in everything that I do. I know it will never be good enough for some people, but it’s good enough for me, AND IT’S GOOD ENOUGH FOR GOD. God wants us to show mercy and forgiveness. Especially to those that have wronged us. Before you act out of anger or spite. Take a second and ask yourself how you would want someone to act towards you in this situation. If you can honestly answer that this is what you would want, then this is the way you should respond in kind.

Take Mathew 18: 21-35 for instance. The servant was not able to pay his debt and asked the master for patience and mercy. The master went even further and forgave all the servants debts. I’m sure the servant was very grateful and thankful. Maybe he even thought “wow what a lucky day I am having”. He then immediately went and threated a fellow servant that owed him money with extreme hatred and greed. Had the servant taken a second to think about how he had been treated by his master and how he was treating his fellow servant, would he have made the same choices? God shows us mercy and forgiveness every day in everything that we do. I ask you are you treating your fellow brothers and sister with the same kindness that God has treated you?

Have you been wronged by someone close to you? It is our human nature to want to get back at, harm, punish, or just make feel the way that they made you feel. Is this what God wants? If you have wronged someone how would you want them to respond to you? Would you ask them for forgiveness, or be to proud? If you did ask for forgiveness. Would you want them to forgive you? Can you forgive someone who doesn’t think they did anything wrong or doesn’t ask for forgiveness? Sometimes the person who has mistreated you is proud, stubborn, arrogant, or flatly believes that they did nothing wrong. The answer of course is, yes. Through God and prayer you can slowly begin to heal your heart and forgive. God wants us to show forgiveness and mercy. The way we respond when we are wronged or when we have wronged someone truly shows the person we are becoming. Take a second and look at yourself and see if there is something that you can work on. Look in your heart and see if you are responding in a way that God would want. Through God and prayer he can help you become the person you want to be.

Dear God, Please be with us this week as we go about our day. Please help us to act in the act in a kind and humble manner. Please help us show the same forgiveness and mercy that you have shown us.