Forgiveness can be tough, but it is necessary. 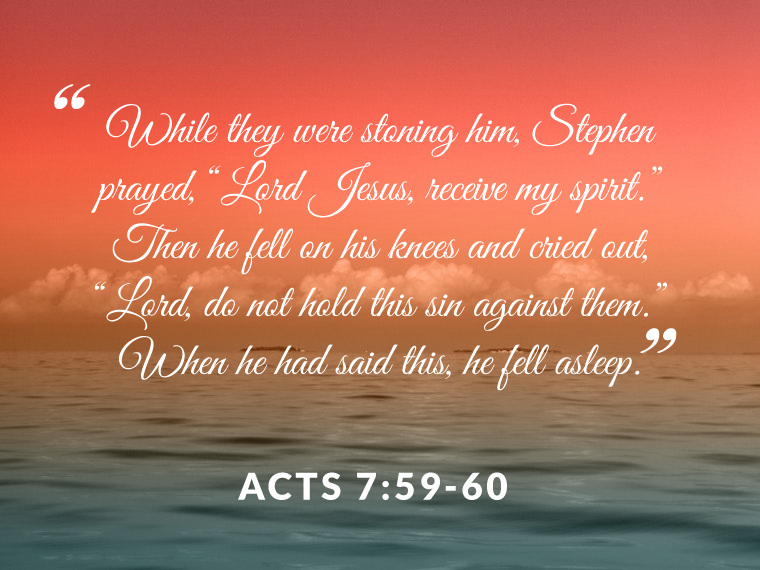 “While they were stoning him, Stephen prayed, ‘Lord Jesus, receive my spirit.’ Then he fell on his knees and cried out, ‘Lord, do not hold this sin against them.’ When he had said this, he fell asleep.”

We have all been wronged and we have all wronged someone in the past. Maybe our sister said some mean things, maybe we made an inappropriate comment about someone’s weight, maybe someone used their position of authority to make your life harder than necessary. We could go on and on. The point is that it happens, every day. How we choose to deal with it is what’s really important. Not only that, but also how quickly we forgive them for their actions or how quickly they forgive us is really the thing that we need to look at.

Stephen CHOSE not only to forgive those who were literally attempting to kill him while they were in the act, He asked God to forgive them as well. That’s true faith and someone who is great at forgiving.

Think about the last time you were wronged by someone. Was it really important, did it alter the direction of your life? Did what they do really cause so much damage that you couldn’t move forward? I’ve been there, or at least I thought in the moment. Then later God showed me how their actions were something that I could learn from, or because of what happened my life was altered in such a great way. I couldn’t see it at first though. How quick did you forgive the person that wronged you? Did you have the courage to do it instantaneously or did it take days, weeks, months, or even years? Who were you really hurting in the long run by not forgiving them right away? YOURSELF! That’s right by choosing to hold a grudge you were only hurting yourself.

Now let’s turn the table. When was the last time you wronged someone? How did you feel afterwards? How long did it take them to forgive you? If they harbored that grudge for a long time, did you finally give up and stop trying to right the wrong? I know that I have, it just wasn’t worth my time to worry about why they were still upset. On the same topic, were you able to forgive yourself? Personally, I have done some very UN-GODLY things in my life that I am down right ashamed to talk about. There are things that I still struggle with forgiving myself for, even after 20+ years. Don’t forget to forgive yourself for your transgressions. Don’t let them happen again, but forgive yourself it’s the only way that you begin to heal.

I know that there are some of us that are reading this thinking about one particular incident where we just can’t forgive that person. I’m asking that you try, praying for god to soften your heart and theirs, pray for god to come into your life in a way that will allow you to let go of the pain.

Forgiveness is a powerful tool; we just have to use it.

Lord, we come to you today with many different emotions. We are thankful that you gave us the power to forgive others and ourselves for any mistakes that might have been made. God we ask that you come into our lives and place your hand on us; you open our hearts to possibilities and opportunities that come with forgiveness. We pray that you guide our words and thoughts daily so we don’t hurt anyone. We know that through you anything is possible. We know that we can move mountains through you. Help us to see that by not forgiving others we are only hurting our relationship with you. We ask that you open our eyes and our hearts so that we forgive with the same compassion Stephen had. Lord we thank you for everything and everyone that you have placed in our lives. We are thankful that you are involved in every aspect of our life. Thank you for your son, and the sacrifices that he made for us. Thank you for all the wisdom about forgiveness that you share throughout the bible. We do ask that you help us to forgive quickly, and that you help others to forgive us quickly. Help us not to harbor grudges against anyone. Thank you for your guidance and wisdom