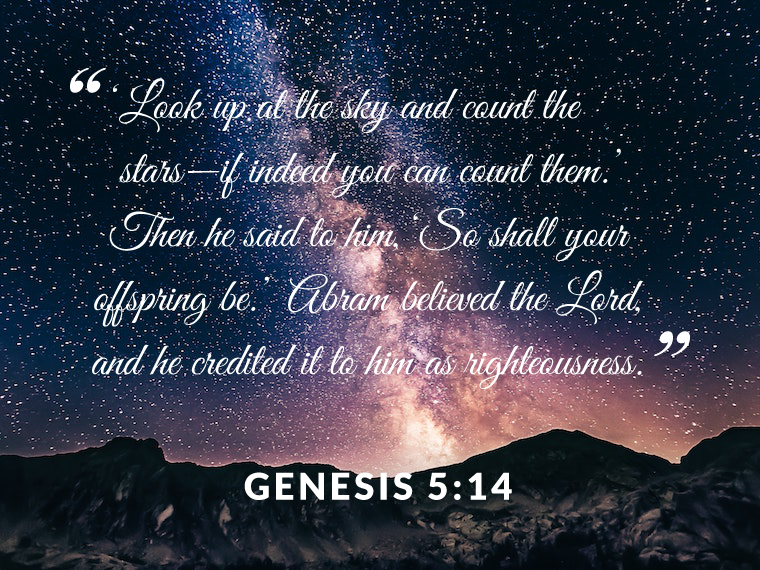 “Then the word of the Lord came to him: ‘This man will not be your heir, but a son who is your own flesh and blood will be your heir.’  He took him outside and said, ‘Look up at the sky and count the stars—if indeed you can count them.’  Then he said to him, ‘So shall your offspring be.’  Abram believed the Lord, and he credited it to him as righteousness.”

Some of the most successful people in this world will tell you that believing is everything.  Walt Disney said “When you believe in a thing, believe in it all the way, implicitly and unquestionable.”

Abram had this belief in God’s promise.  He was 100 years old when Sara became pregnant with Isaac.  I don’t know about you but I think that I would struggle being a 100 & believing that my 99-year-old wife conceive.  Science and world was against this completely.  She had already been through menopause and was “no longer in her childbearing years.”  There is no possible way that this could happen.

That didn’t stop Abram from having true belief in God’s promise though.  He put science &the world in the back seat and made the conscious decision to trust God.

Have you ever had to make that decision?  The one where you know that God is telling you that this will work.  He is saying JUMP, NOW, but the world is saying “no way!”  I think that we all have all been there.

How did you handle the situation?

Personally, I have gone both ways.  There were times where God would speak to me and I chose to listen to the world and science.  I chose not trust that it will work.  Then there were also, times where I consciously put my earplugs in so I could NOT hear the world telling me how this couldn’t happen.  Every time I chose to listen to God, we have prospered.  Sometimes those came in the form of lessons learned, but we always prospered.  We always gained exactly what he need me to.

Next time you hear God speaking to you, what will you do?  Will you choose to be like Abram, Joseph, Daniel, Samson, John, Ester, & all the other leaders throughout the bible, or will you chose to follow science and the world and tell God that he is NOT capable of making it happen in your life?

Lord, we come to you today with an open heart & especially an open mind.  We ask that you help us to have the faith of a mustard seed or even the faith of a Redwood seed, (one of the largest trees in the world yet also one of the smallest seeds).  God we ask that you help us to know deep in our hearts that you have this all under control.  Help us to tune the world out and turn you up.  Increase our faith and prove the world wrong.  We know that you can, and do every day.  We pray that you open our eyes to see all of the mind-blowing miracles you do every day.  God thank you for the ability to have belief so strong that we know beyond a reasonable doubt that it will happen.  Thank you for giving us the courage to go out in the world and spread your word!  Thank you for all of the encouragement you have spread throughout the bible.

All those suffering from the effects of COVID-19