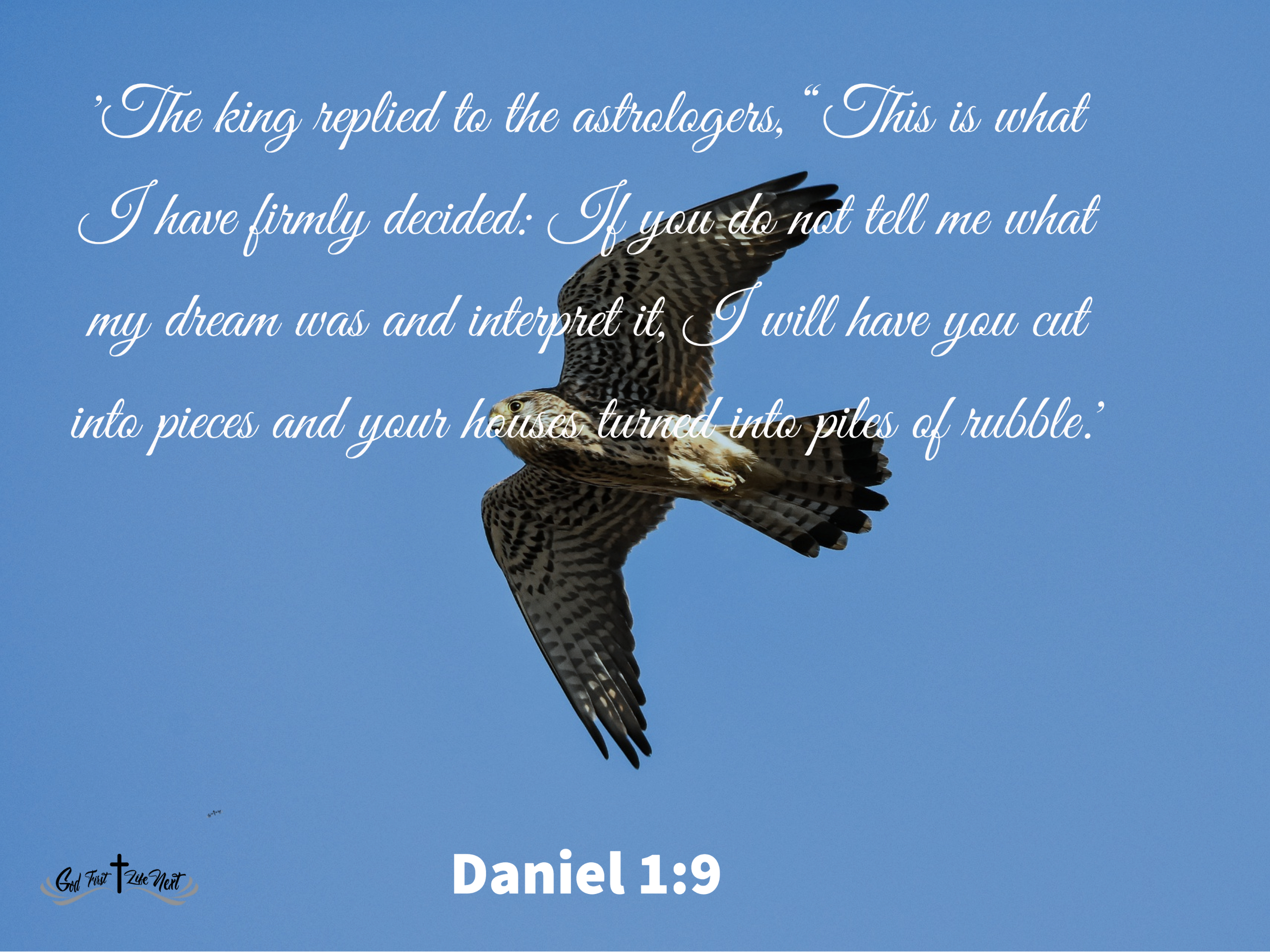 “The king replied to the astrologers, “This is what I have firmly decided: If you do not tell me what my dream was and interpret it, I will have you cut into pieces and your houses turned into piles of rubble.’

Could you imagine if you were summoned into the bosses office and he said hey “your name” I had a dream last night and if you can’t tell what it means then I’m going to fire you?

Ok this was just a little tougher punishment than getting fired….

But you get the point.

You might be thinking ok, I will just make up an answer so I don’t get fired.

Then your boss says, ok tell me what my dream was and then give me your interpretation of it.

Wait, what happened to you telling what your dream was.

When the king found that none of his advisors could do what he asked he sentenced them to death.

Daniel and his friends were in their “apartment” living life as they always did, no clue that any of this had happened.

So when the guards came to get them and take them be killed, Daniel was a bit shocked.

Kind of like the boss’s assistant coming to your office and saying, “Alright you’re fired, pick up your stuff and get out.”  I think I would go ask the boss what was going on.

Just as Daniel did.  He asked the guard what was going on, when they told him he used his tact to ask to see the king.

The guard obliged him and took him over right away.

When Daniel spoke to the king I’m sure he had used massive amounts of tact again just to talk to the king.

Then Daniel asked for a few days to go and pray for God to give an answer to the king’s request.

The king allowed it.

Can you imagine the prayer Daniel had,  I’ll bet it went something like this, “hey God, Daniel here.  You know, the guy you kind of like. You helped us out by keeping us healthy when drinking water and eating vegetables only.  God, I can’t imagine that you kept us so healthy so we could die because no one could answer the king.  Is there any way that you could help us out a little here.  You know lots of other people’s lives are kind of depending on us.  We know that all things are possible with you, you have proven it to us time and time again.  If you could just show us a little more favor we would really appreciate it.  Thank God. Your friend and follower, Daniel”

Can you hear his tact in that?  I can.

Anyways God gave Daniel the answer that the king needed.

The king was amazed and actually praised Daniel and his God.

The key here is that Daniel, much like Joseph, didn’t accept any of the credit.  They both gave it all back to God.

The point is that Daniel could have said, “Look what I did, I saved all these lives and told the king his vision. Something that no one else could do.”

‘As for me, this mystery has been revealed to me, not because I have greater wisdom than anyone else alive, but so that Your Majesty may know the interpretation and that you may understand what went through your mind.’ Daniel 2:30

Daniel’s humility is what saved him. And will continue to save him throughout his story.

God today we come to you with a humble heart.  We know that everything is possible as long as you are involved.  I mean you created the heavens and the earth in six days.  That is just amazing.  Not only that God, but you created each and every one of us, and filled us with different types of knowledge.  Lord, today we want to ask, that you give us a humble heart and mind.  Allow every word that comes out of our mouth and every thought that we have to be humble and show our humble hearts.  God you are great and you give us so much more than we deserve.  You saved Daniel and so many others, just as you save us each and every day.  Lord, we thank you for everything that you have done for us, even though we don’t deserve any of it.  God helps us to show the world you through our actions.