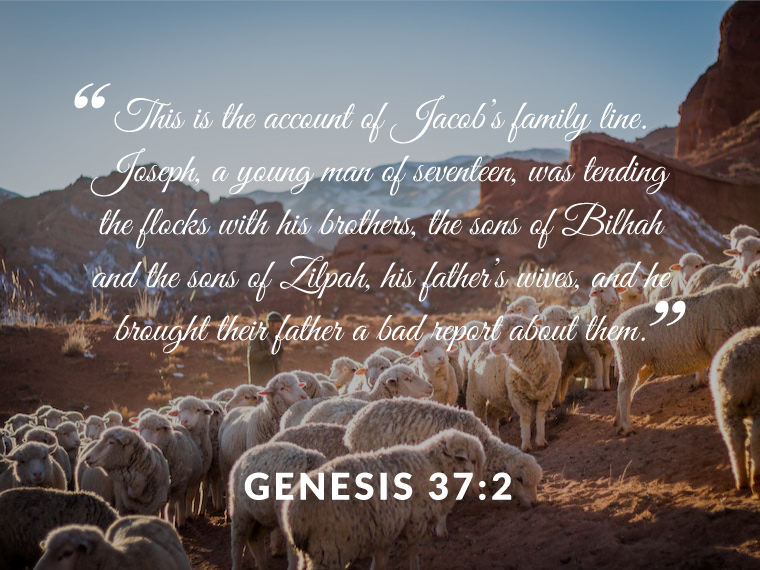 “This is the account of Jacob’s family line. Joseph, a young man of seventeen, was tending the flocks with his brothers, the sons of Bilhah and the sons of Zilpah, his father’s wives, and he brought their father a bad report about them.”

Over the next few weeks, we will be discussing Joseph and his relationship with God and his family. We hope that you invite others to join our weekly devotionals. Share this with your friends, family, and yes-even strangers!

The story of Joseph starts in Genesis chapter 37. A quick overview of Joseph said his brothers sold him into slavery. Work diligently to be the leader of Potiphar’s household, wrongfully imprisoned for doing what was right. Became a leader within the prison, interpreted multiple dreams, was forgotten about for several years, then had to share extremely hard news with a pharaoh of Egypt. In the end, Joseph was second to Pharaoh over all the land he governed.
Let’s go back to the beginning.

Can you imagine being given dreams or visions from God at the age of 17? Now put yourself in the brothers and parents’ shoes. Can you imagine your son or daughter or your little brother coming to you saying they’ve had a dream where everybody in the family bows down to them?

Having a teenager in our house, I know but it takes them a lot of courage to talk about private “stuff” and yes, dreams are private.

Second off there might have been some slight gloating from Joseph as he talked to him about his dream. Many teenagers ok most of them; have just a little bit of “Cockiness” when they talk.

Joseph’s brothers didn’t like it for a couple of reasons. One of those reasons why was because they felt their father loved him more. They also didn’t like him because he came back and told his dad the truth about what they’ve been doing.

When Jacob sent his son Joseph out to check on his brothers in the field and to see if they needed any help to see how they were doing. They see him coming from a distance talked about killing him. However, one of his brothers stepped up and said don’t kill him, let’s just thrown in a cistern.

His brother had planned to come back and rescue Joseph. Before he could come back, his other brothers sold him into slavery for what equates out in today’s currency to be less than $140.

Take a second and think about a 17-year-old boy pleading with his brother’s not to be sold. Never knowing where he might end up what might happen to him. Then having to walk to Egypt without truly knowing where you are going.

At my age today, just the thought of that happening to me or one of my children scares me to death.

The Bible never says that Joseph wasn’t scared. What we know is that Joseph had to trust God. He had to know beyond any doubt that God was going to take care of him.

God today we come to you almost with an aching heart for Joseph. God we know but all these things had to happen to Joseph so you could be glorified through them. I’ll be honest to God; I’m scared and excited about how you might use us to glorify your name. Lord I would like to ask that you give us the courage of Joseph. The courage to trust that you are in control in that you have the right plan for our lives. Lord God, we know you see so much more than we can ever imagine and it’s you understand every. We are thankful you have chosen us to serve you. Help us learn how to serve you better.