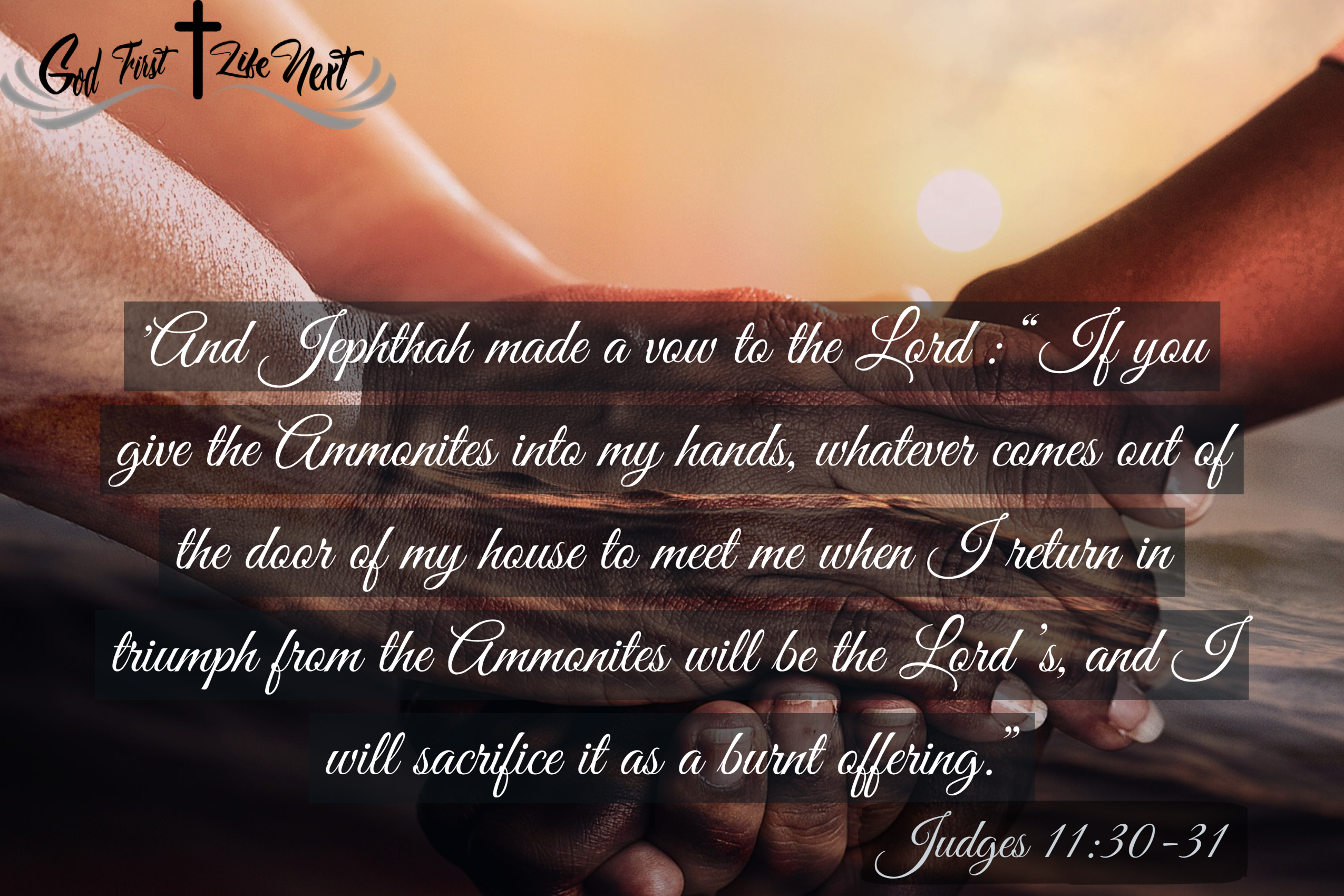 ‘And Jephtah made a vow to the Lord : “If you give the Ammonites into my hands, whatever comes out of the door of my house to meet me when I return in triumph from the Ammonites will be the Lord ’s, and I will sacrifice it as a burnt offering.”

Have you ever bartered with God?

I know that I have in the past.

“God if you protect me from this situation I will stop cursing.”

“God if you save me from this I will go to church every Sunday for the rest of my life.”

“God if you help me win this one argument with my wife I promise to pray every day, earnestly”

Bartering with God is exactly what Jephthah did.  He told God that if he allowed him to win, when he got home whatever came out to meet him he would sacrifice to God.

I’m sure that he was thinking some animal would come from the village to greet him.

But that’s not what happened.

His daughter came dancing out to the sound of timbrels (music) to greet him. Judges 11:34

The difference between Jephthah and most of today is that he followed through with his word.

He told his daughter about the “bartering” he did with God, and she asked him if she could go to the mountains with her friends for 2 months to mourn for her own death with them.

I know that this truth might be hard to think about.

As a father, it wouldn’t matter how many children I have. It would be an impossible task to sacrifice one.

Especially because of a deal I had made.

God doesn’t want to make deals with him, he wants us to trust that he is looking out for what is best for us.

‘But I tell you, do not swear an oath at all: either by heaven, for it is God’s throne; Matthew 5:34

‘And do not swear by your head, for you cannot make even one hair white or black. All you need to say is simply ‘Yes’ or ‘No’; anything beyond this comes from the evil one. Matthew 5:36-37

As humans we want to give something in order to get what we want.

God doesn’t work that way.  He just wants us to live a godly life and in return he blesses us beyond belief.

The best thing that we can do is trust Gods’ plan and know that he has our backs, no matter what we think.

Here is what I want to encourage everyone to do today.

When you are between a rock and a hard place in life next time, don’t barter with God.  “Lord, if you save me, I will stop drinking!”

Instead pray this prayer:

“God, thank you for the opportunity to look to you for advice. “Father, if you are willing, take this cup from me; yet not my will, but yours be done.” Luke 22:42

Take a page from Jesus’s book from a time when he was facing his own sacrifice.

Lord, God  Almighty Father of heaven and earth, Thank you!  Thank you for the lessons that you give us throughout your word.  God, you have an amazing way of teaching us, even when we don’t really want to learn.  You gave us such great examples to learn from.  Jesus being the best example of how to act, forgive, and love!  God we are grateful that you haven’t held us to the bartering that we have made in the past.  We do ask that you help open our eyes, open our ears, and close our mouths when we are in a “tight” spot.  Help us to hear you, to see your way, to follow you because you always have our best interest at heart.  God, you are amazing.  God, we are so grateful for everything you give unto us.  Lord, we do pray that you help us be closer to you.  Help us to know that you are here for us, in every situation.  Help us to lean on you harder every day.  God thank you for everything that you do for us!  Help us to do MORE for you, and in your name.

For all Law enforcement and emergency response personnel

For those in Leadership positions throughout the world