When Things Get Hard Don’t Give Up 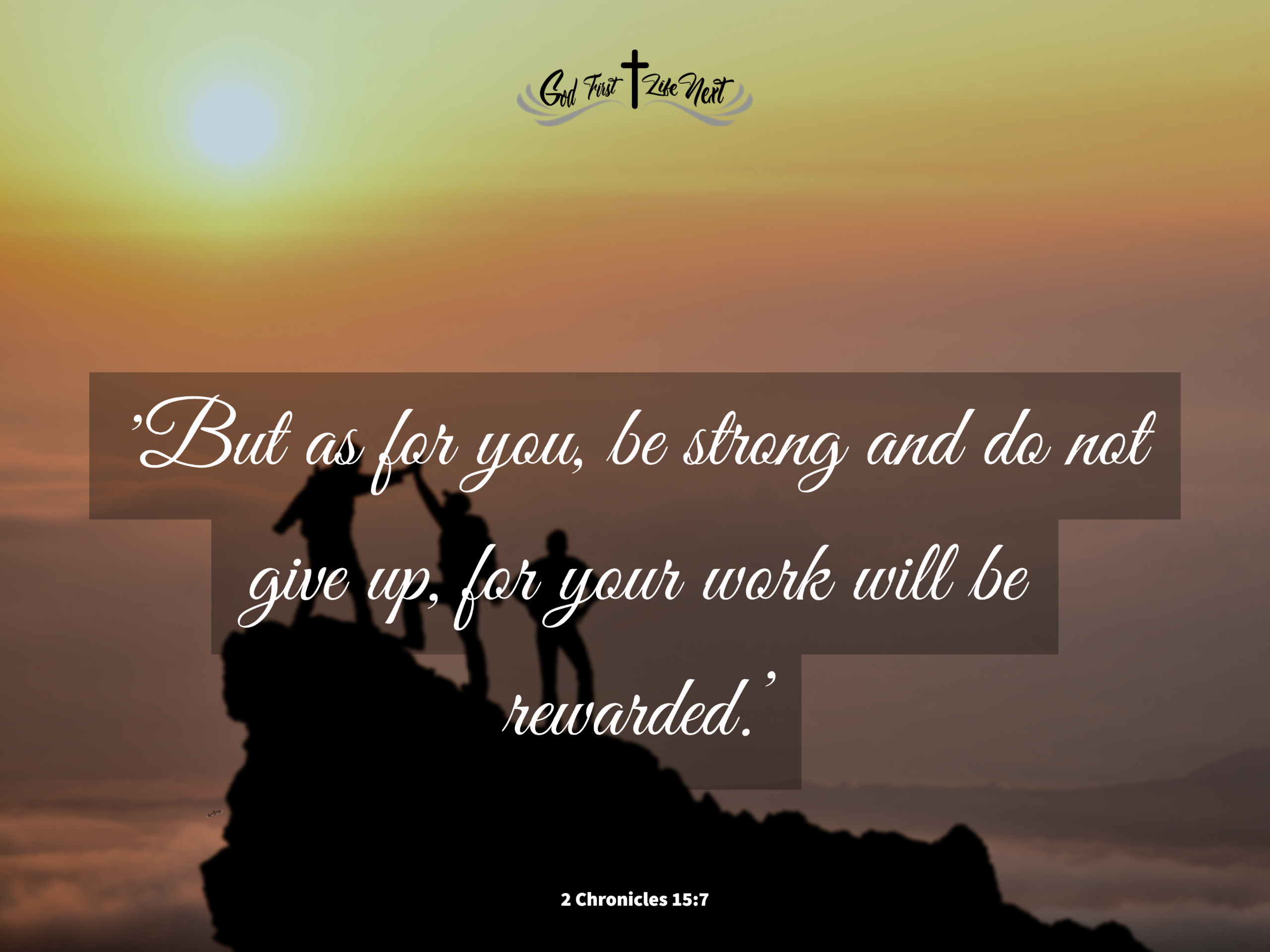 “But as for you, be strong and do not give up, for your work will be rewarded.”

It would seem that God allows us to persevere through mistakes and harder times so that we can learn.

Or at least that’s what I think it is.

Recently Jenna and I had a, well let’s just call it “heated discussion”.  It wasn’t fun.

The big problem is that I get hot and then cool off quick, like most guys.  Then I try to start the repair process too soon.

Because she is still hot.

Then that makes me hot again, and this time I stay hot for a while.

So, when she is ready to start the repair process I am HOT, then she feels bad that she stayed hot for so long and feels like she lost her chance to make a quick repair.

In the end, we both try to repair what happened, but just not at the proper time.

The whole reason I wanted to share this with you is that it has been happening for the past 18+ years that we have been together.

When we got married at our shower an older lady, Marry Dossey, gave us some firm advice. Her words will most likely stick with me until the day I die. I’m going to give them straight. So please excuse a few words, but I feel that it will show you her true character as someone who always shot straight.

She said, “Everyone will tell you to never go to bed mad. Hell, if Richard and I would have done that, I would have never slept! Sometimes you need to cool down before you can start to fix the issue.”

We are all different.

Honestly, God knew that I needed to hear what she had to say. Because I like to fix problems and fix them FAST.

If we think about it in terms of an engine.

We can’t begin to fix the internal problem until we first shut the motor down. Then if we don’t give it time to cool down before we start the repair we are going to get burned in the process.

The first step is to shut it off.

Then give a little time to cool down.

Then after that, we can start to repair the damage.

The last step after you get it all put back together is to start slow!

There is no way that I would rebuild an engine, slap it back together, then fire it up at full throttle.

I’m the guy who always has 2 or 3 “extra” bolts, so I’m going to be standing behind something strong when I fire it. Praying the entire time, the things don’t blow up.

My whole point is that after we make any kind of repair to anything, we have to start back slow.  We can’t just jump back in full bore.

It takes time to get back up to speed.

But boy, after we make the repair, and a few minor modifications. Like adding twin turbos, upgraded pistons, and some other amazing enhancements.

That engine will actually run better than it ever did before.

Our relationships are the exact same way.

When we fix issues that come up we are adding those amazing extras to our relationship. Maybe it’s a journal that we share. Maybe it’s a safe word that means to stop for a few moments. Maybe it’s a change in our diet that causes us to be in a better mood.

It doesn’t matter what it is. The point is that we can make it run smoother, faster, and more effective after a repair. Depending on how much time and effort we put into making it better.

As you read this you are probably thinking. “Dan, what the heck does this have to do with not giving up when things get hard?”

If you go back and re-read this you will definitely see the message, even if you have to read between the lines.

But like Mary Dossey, I’m a straight shooter too.

So i’ll just tell you.

Most relationships end because someone decided to give up.

Most businesses fail because someone decided to give up.

Most jobs are lost because someone decided to give up.

Most people fall away from God because they gave up when things got tough.

Do you see what I’m saying here?

If one side gives up then eventually both sides will give up.

The only time this never happens is with God.

He is always there for us, we just have to ask. Matthew 7:7

That is why God is still so prevalent in so many lives. Because he NEVER gives upon us.  All we have to do is ask for forgiveness and he grants it to us.

No matter how big the mistake we made was.

Dear God, Today we come to you with hearts that heavy but also full of joy.  God today we come to ask that you guide us throughout the repair process of all of our relationships.  Help us to not hold any grudges against anyone. No matter what they have done to us in the past.  God, we pray that you help us to forgive them and allow them to forgive us.  I am sure that I offended someone (lots of people) in my short life. So I pray that you would help those I have hurt to mend. I pray that you would help me to mend my heart, body, and soul with every affliction that I have against anyone.  Because God I know that if I can’t mend myself then there is no way that others can mend against what I have done to them. God, we all have secrets in our lives, but you are our secret keeper and you know everything about us. So, I pray with all of my heart and all of my entire being that you could help us to forgive ourselves for anything that we might have done to cause pain in the past. God, I also pray that you are with every relationship throughout this entire world. Be with all of us God. Help us to grow and when we make repairs help us to add those awesome new features that will help us have smoother relationships in the future.  God today we pray that you will give us the strength to ask for what we need!

We pray all of this in your precious son’s name.

Lord today we come to you on our knees asking that you help us to see how we can better serve you. We come to asking that you take a few moments out of your busy day to show us exactly what you need. Then God we ask you for the courage to go out into the world and serve you the way you want is to. We pray God for your guidance and wisdom in every aspect of our lives. We are thankful that you allow us to serve others. We are thankful that you give us those opportunities. We pray that you would help all of those around us who might not fully understand what being a servant really is. Help them to see how being a servant is the highest honor we could ever ask for. Lord thank you for the wonderful title of SERVANT. Thank you for your love.

When I wrote this devotional Jenna and I were in the middle of a “heated discussion” it started over something stupid and small, then was blown out of proportion rather quickly, by my temper mostly.

We had not yet started the repair process as I wrote this.

But what I found is that as I wrote this for others to read a few things occurred to me.

Then I would have never been able to share it with the world.

Everything happens for a reason.

I know that some of you might be thinking that I’m saying that divorce is an “easy” way out. And this is NOT what I am saying at all.

While I have never experienced it firsthand, I have been around families who have. And I KNOW that it is an extremely hard decision to make. Because that decision does not only affect the 2 people in the relationship it affects everyone around them.

What I’m saying is that we made a decision that it was not an option for us.

So, if I turn up missing and you can’t find my body, you should start asking Jenna questions. Just kidding! (Kind of) lol

There are so many more things that I learned. But the point of this part is to tell a story.

So let’s tell one.

WAYYY back when Jacob was a little guy. He couldn’t even walk yet.

We made a trip up to see Jenna’s family for a few days, then shot over to the redwoods. Because we were all the way up there, why not add a few more miles to our trip?

This is back before we had a smartphone, or maybe any cell phone, I can’t remember.

We were staying in Crescent city, CA. (still, one of our favorite places to go, if you ever get the chance to go, GO!)

We had a digital camera that was pretty nice for our little family.  Throughout the entire trip, we had taken TONS of pictures.

Then when we were checking out a lighthouse in Crescent City, Jenna gave the camera to Billy. Who at the time was 6.

Why did she give it to him?

Because he wanted to take pictures of the ocean!

And we both encourage our kids!

Neither of us was paying attention and he set the camera down on a bench and we walked back to the car.

About an hour later one of them asked the other for a camera.  And neither one of us knew where it was. I tore the car apart, while Jenna scoured the hotel room.

Then she came out with tears in her eyes as she remembered that she gave it to Billy at the ocean.

Instead of getting mad. We loaded up everyone and headed back to where he had remembered leaving it on the bench.

When we got there, guess what???

The camera was missing, someone had picked it up.

So we went to the town hall to see if anyone might have turned it in.

No one had turned it in either.

Jenna felt horrible because we had taken LOADS of pictures that were now gone with no way to get them back.

We went and picked up a little disposable camera because we were at the redwoods and wanted some pictures of the kids.

In the end, Jenna reached out to her stepmom, and their entire family pooled all of their pictures of our family together and she sent us an SD card in the mail of all the pictures!  We got about 5 times as many pictures as those we had taken.

In the end, God gave us all the pictures we would ever need to build an amazing memory.

And since that first trip where we fell in love with those GIANT redwoods, we have made it back out there at least 3 more times.

And every time. I look at that stupid bench by the lighthouse for our little digital camera.