You can do anything. 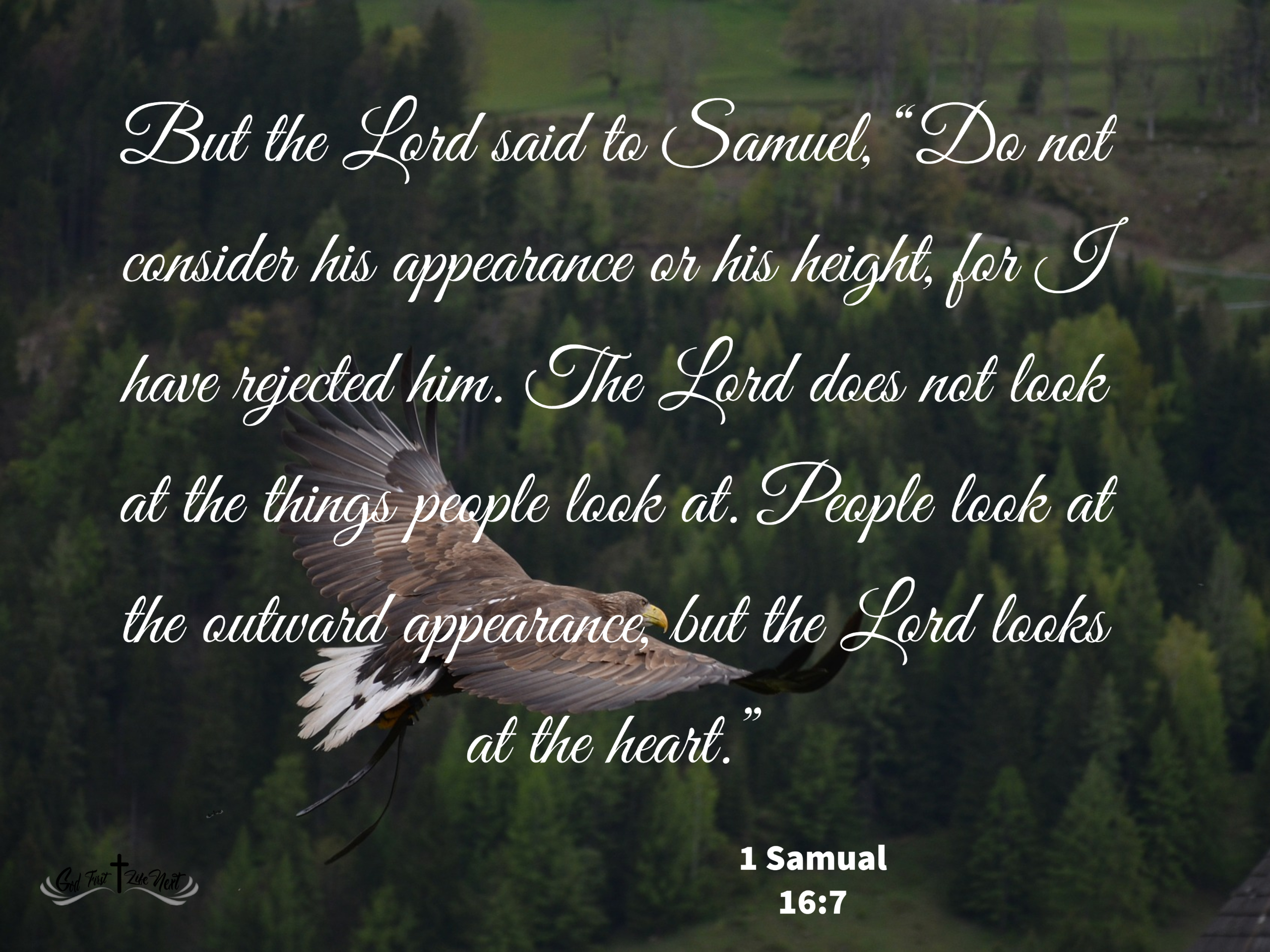 All too often we look at someone’s appearance and don’t see what God sees.

Heck, I do this with myself every single day.

When I look in the mirror I might see someone too young to lead a team. Or an aging person who has passed their best opportunities because I was to scared to listen to God.

Sometimes I see a guy who looks too tired and worn out to keep moving.

But that’s not what God sees.

He looks past the outward appearance to see what’s really on the inside.

Someone who never gives up.  When they are told “No” it really means that I try even harder to make it happen.  A person who has the knowledge to do anything I want.

God did the same thing when he chose David to be king.

If we go back and read a few verses before this one you would find that Samuel really thought that Jesse’s oldest son was going to be chosen to be king.

Probably for a few reasons.

He was strong, had distinguished features, and he looked the part.

What Samuel couldn’t see was his personality.

After God said, “Not this one” I’ll bet Samuel was a little disappointed.

He went through all of Jesse’s children and God said, “Not this one.” to all of them.

Then Samuel asked, “do you have any other children?”

Jesse told him,  “One more he’s out in the field with the flocks.”

They sent for David and the bible describes him as, “Ruddy”!

Ok, Then it goes on to also describe him as “God Like” too.

But you see God never judges a book by its cover.  Why do we judge ourselves as well as others by our appearance?

Have you ever seen someone in a suit and thought wow that guy/gal must be important?

Or seen a person walking down the street in jeans with holes in them, and an old T-shirt and thought glad I’m not like him.

Our outward appearance doesn’t affect what God has in store for us.  It doesn’t change what he wants us to do.

The only thing that changes that is our decisions.

Do you listen to God and know that we can do anything? Or do you listen to your inner critic and not get off the couch because “you’re not good enough?”

Today is your day to take action!

Get up look in the mirror and see the REAL person God shaped you into.

The Vibrant, outgoing, gorgeous person he designed has been right there the whole time.

God today we come to you to say thank you.  Thank you for designing us exactly the way you did.  Thank you for hiding our potential until we could handle seeing what you had in mind for us.  Thank you for giving us the strength to move forward when you need us to.  God, we know that our vision isn’t as good as yours.  We don’t always see things the way you need us to. So we ask that you would help us by giving us a dose of your vision today. Help us to see the person you designed us to be.  Helps us to know where you need us to go and who you need us to touch, with your word.  God when you chose David you knew what he would grow into even when Samuel couldn’t see it. God, you are amazing and we know that.  We know that you love us, and want us to grow into the person that you truly intended us to be.  Open our eyes to see our potential, and give us the strength to pursue it.

Thank you for everything that you give to us.  And yes God that includes our untidy hair, overgrown beard, dirty clothes, God everything.  Thank you!